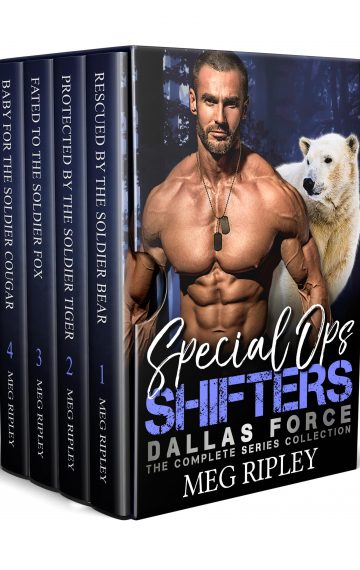 Get lost in the fiery, action-packed pages of the Special Ops Shifters: Dallas Force series, now available as a complete collection! These rock-hard alpha shifters will stop at nothing to protect their mates, no matter what dangerous missions they face.

If you like swoonworthy shifter tales with powerful soldiers, camaraderie, strong and sassy heroines, action and adventure, and an adorable baby she-cub, you’ll fall in love with the Special Ops Shifters: Dallas Force series.

Ash
After retiring from the Delta Force, I’m more than ready to settle down.
I’ve got my eye on a ranch in Alaska, where I’ll have the freedom to unleash my pent-up polar bear at will.
But my inner beast knows life up north will be a lonely one without a mate.
When the Special Ops Shifter Force asks me to enlist in their new Dallas unit, curiosity gets the best of me and I rethink my plans.
Being deployed on a covert mission to Antarctica wasn’t something I expected.
Neither was finding a dragoness who captivated my bear the moment we met.

Lane
My flight and I relocated to the tranquility of Antarctica years ago.
But as one of the few dragons in existence, I don’t know if I’ll ever find my fated in a place so remote.
Our serenity is shattered when the military infiltrates, quickly turning our home into a prison for experimentation.
But little do I know the rebel who claims he’s come to help might also rescue my heart.
Can I trust my so-called savior, or is this the end for me and my clan?

Steamy shifter love scenes and HEAs inside! No cheating or cliffhangers in these standalone stories. Readers 18+.