You are here: Home / Library / Shifters Between Worlds: The Complete Series Collection 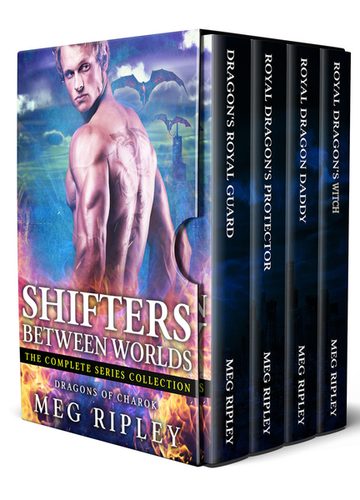 The last of the royal dragon babies were brought to Earth before they could become casualties of the War of Storms. Now that they’ve come of age, their inner beasts’ desires are awakening. And they’re ready to claim their mates, even if they must cross into dangerous realms to find them.

Finn
My ex told me she was pregnant with my dragonling, and unless I took full custody, he’d be put up for adoption.
I never expected to be a single dad to adorable little Phoenix.
Nor did I think I’d ever find a mate willing to raise another woman’s baby.
Until I met Aurora.
And from the moment we locked eyes, my dragon knew she was mine.

Aurora
I spend my days wandering the Earthen woods, hoping to repair the damaged veil protecting my fae realm from being seen.
When I ran into hunky, blue-eyed Finn one day, I couldn’t deny our explosive chemistry—or my intuition telling me he’s a dragon.
But wizards who’d promised to help me mend the barrier are suddenly enslaving my people, and my focus must return to my homeland, no matter what my heart wants.
When I learned the wizards had been on the hunt for dragons, I conjured up a desperate plan to turn their attention elsewhere—which involved baby Phoenix.
I’ve done something unspeakable to save my realm, and I don’t know if Finn will ever forgive me.
But now that our worlds have collided, there’s no turning back.

This anthology includes Royal Dragon Daddy and the other three sizzling stories of the Shifters Between Worlds series: