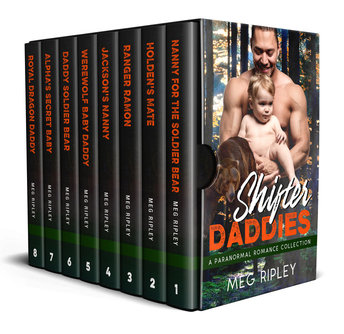 Protective single dads.
Sexy shifters thrust into sudden fatherhood.
Adorable shifter babies guaranteed to tug at your heartstrings.
Fated mates and happily ever afters.
Find them all in this collection of eight hot shifter romances!

After being deployed to Afghanistan, I don’t think I’ll ever be right again.

I can hardly keep my bear in check because of the PTSD that haunts me, and I’m ready to snap.

So when I find out that my brother and sister-in-law were murdered—leaving me as the guardian of their little girl—I know I can’t handle this alone.

But I never expected her to capture mine.

My bear knows Jessie belongs to him, but just my luck, she’s not one of us.

Will our unimaginable secret send her running for good?

Grab Nanny For The Soldier Bear and the following standalone shifter daddy romances in this sizzling anthology: