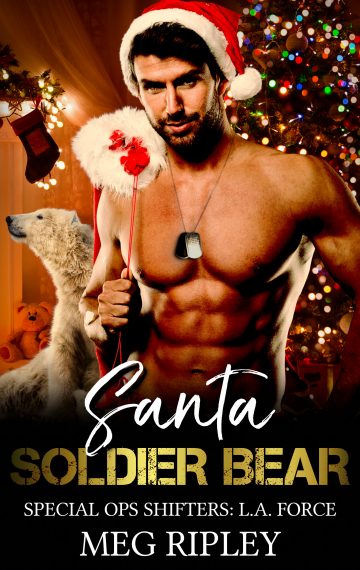 They say you can’t run from your past, but that’s exactly what I did.
I was minding my own business, tending to my ranch, when an old Army buddy called me up.
After the hell I’d been through, he didn’t want me to spend Christmas alone,
So I agreed to head to L.A. and put on a damn Santa suit for his holiday party.
I knew it would be packed with strangers,
But I didn’t know one of them would turn out to be my mate.
Melody’s fiery hair and cat-like eyes had my polar bear standing at attention.
And when she sat on Santa’s lap, she got far more than a present.
Our bond is unmistakable, but there’s a catch.
Having cubs is totally out of the question for me, but it’s all she’s ever wanted.
When a baby’s dropped on the Force headquarters’ doorstep, the holidays turn dangerous.
But will this bundle of joy be the Christmas gift that keeps us from falling apart?

Steamy shifter love scenes, adorable shifter babies, and an HEA inside! No cheating or cliffhanger in this standalone romance. Readers 18+.