You are here: Home / Library / Fated Protectors: Shifters of the Elements, Books 1-4 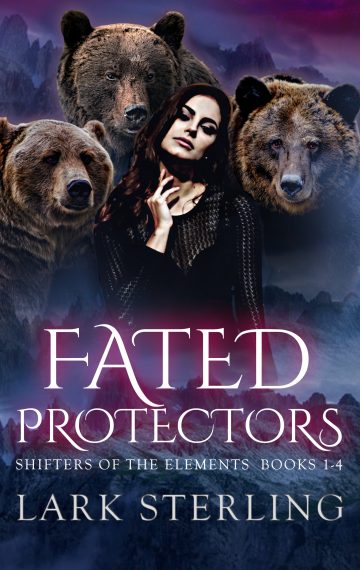 Four Shifter sisters are destined to become the new protectors of the world.
But each must find her circle of three fated mates to fulfill the prophecy.

FOUR OF THE HOTTEST WHY-CHOOSE SHIFTER STORIES IN ONE EPIC COLLECTION!

Lose yourself in a rich fantastical universe filled with fiery passion, adventure, discovery, and wonder. Join Shifters from the land, sky, fire, and sea as they battle unspeakable evil to save the world in Fated Protectors, a sprawling collection that will grip you for hours on end.

Book 1: Her Earth Mates
Taking over as the Earth High Alpha after my mother passed has been overwhelming.
But you can’t escape what’s written in the stars.
My she-bear is destined to unite with three fated mates.
These loyal bears have sworn to protect me as prophesied by the Ancestors.
As our bonds strengthen, my magical abilities reach heights I never imagined possible.
But will it be enough for us to ward off the enemies who will stop at nothing to block my succession?

Book 2: Her Sky Mates
Once I was named the High Alpha Griffin, I was tasked with finding my mates:
An Owl, a Raven, and a Lamassu Shifter.
Together we must defeat Hellforth, an evil Bat Shifter that was assumed dead,
But is back with a vengeance, threatening the very existence of our species.
Just because I’ve got my mates by my side doesn’t mean I’ll win the fight ahead,
For fate plays no part in the battle for the Shifters.

Book 3: Her Fire Mates
Stepping into the role of High Alpha Dragon,
I must leave the Enchanted Islands and find my mates.
Turns out my fated trio,
A Wolf, a White Stag, and a Phoenix Shifter,
Had never been more than an island away,
Watching my mind, body, and soul.
But I found them just in time.
The Fire Catcher has escaped from beneath the island,
And is now on the hunt for my mates and me.

Book 4: Her Sea Mates
Once I became the High Alpha Dolphin,
I discovered dark forces at play,
And they don’t want me anywhere near my mates.
Fate soon delivers me a Dolphin, a Merman, and a Shark Shifter,
And with each day I spend with them, my powers grow stronger.
But the enemy lurks within the darkest parts of the ocean floor,
Creeping ever closer to the castle, with a plot much larger than my demise.
Together, we must destroy him before he destroys the world.