You are here: Home / Library / Fated Attraction (Shifter Nation: Werebears Of The Everglades) 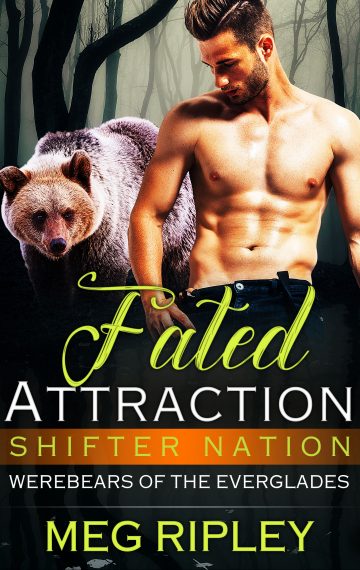 A laid-back bear shifter with a surfer attitude collides with a sassy, badass panther. These two can’t be more different. But they can only fight fate for so long.

Britt’s life as a panther shifter is simple: shift, hunt, repeat. This tough-as-nails Gladeswoman doesn’t want any man in her life; he’d only get in her way. So, needless to say, when an obnoxious bear shifter claims her kill while she’s hunting one day, she’s not exactly thrilled. Worse yet, he keeps randomly crossing her path. She just wants him to get lost, but something about his scent is undeniably irresistible.

Ezra can’t understand why this backwoods panther chick hates him so much. He didn’t mean to go after her kill; he even left it for her, so what’s her deal? He can’t stand her, yet he can’t stop thinking about her, either. She’s driving him insane–and wild at the same time.

But when a Florida panther is found dead in Everglades National Park–the result of an obvious murder–Britt has no choice but to turn to Ezra. As a ranger in the park, it’s his job to protect all wildlife. They’re forced to work together to find the killer, and Britt’s life is in danger, whether she’ll admit it or not.

Will they tolerate each other long enough to find the murderer? Or will their common goal prove to be the catalyst that brings them together?

Fated Attraction is a 30,000 word novella with steamy shifter scenes intended for readers 18+.