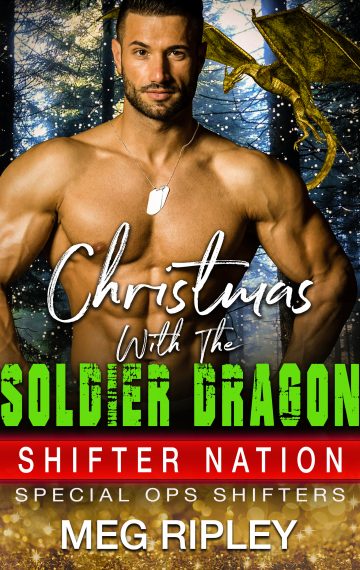 Being the only shifter of his kind, Special Forces Engineer Sergeant Garrison Stokes has never known the sense of family that comes with being part of a clan. With the holidays fast approaching, the dragon sees the rest of his Special Ops Shifter Force comrades getting ready to celebrate Christmas with their mates, and that only magnifies the issue.

So when he’s presented with a mission to investigate a mysterious case of shifter disappearances around Lake Tahoe, he jumps at the chance to get away from it all. But when he arrives, his inner dragon can’t pull himself away from what’s drawing him to the depths of the chilly lake.

The last of Maren Stone’s clan died off ages ago, and with no other dragons shifters left in the world, she’s lived in relative solitude. Protecting her territory on Lake Tahoe has been getting more difficult over the years, thanks to the sprawl of tourism. Now, rumors of the lake monster the humans believe her to be are growing, and she’s in more danger than ever before.

But one night, when she comes face to face with another dragon in the lake, everything she’s known to be true is turned on its head. And awakens the fire that’s long been dormant in her heart.

Finding each other proves to be the greatest Christmas gift they could have ever imagined. But with threats around every corner, will their dreams of finally having a mate be torn apart?